Revealed! Bell Pottinger got R5.5m for one weekend to ‘help’ ANC, MK in anti-white campaign

The London-based public relations firm Bell Pottinger is at the centre of a public campaign to drum up support for President Jacob Zuma and his friends by promoting the myth that the South African economy is largely in white hands.

The #GuptaLeaks reveal that the Zupta account has been so lucrative for Bell Pottinger that it sent an invoice for just under £350 000, about R5,5m), for a four-day trip that included a suggested speech for Collen Maine of the ANC Youth League and a statement for the MK Veterans Association.

This amount allegedly excludes the monthly £100 000 (about R1,5m) retainer to secure the services of Victoria Geoghegan and team to drive a wedge between racial groups in South Africa in the name of preserving the self-enrichment strategy.

Ultimately this bill is being footed by South African taxpayers, as the Guptas have undertaken a wide-ranging strategy – including pulling the levers of political power – to siphon funds from state entities.

Aside from the enormous fees being ratcheted up for propaganda purposes, this latest revelation from amaBhungane also underscores that the ANC Youth League and MK Veterans Association have been “caught and captured” by the Gupta family.

The investigative team at amaBhungane highlight a number of developments in the role of Bell Pottinger, as they continue to work through a data bank of thousands of emails leaked from the Gupta empire, including that: 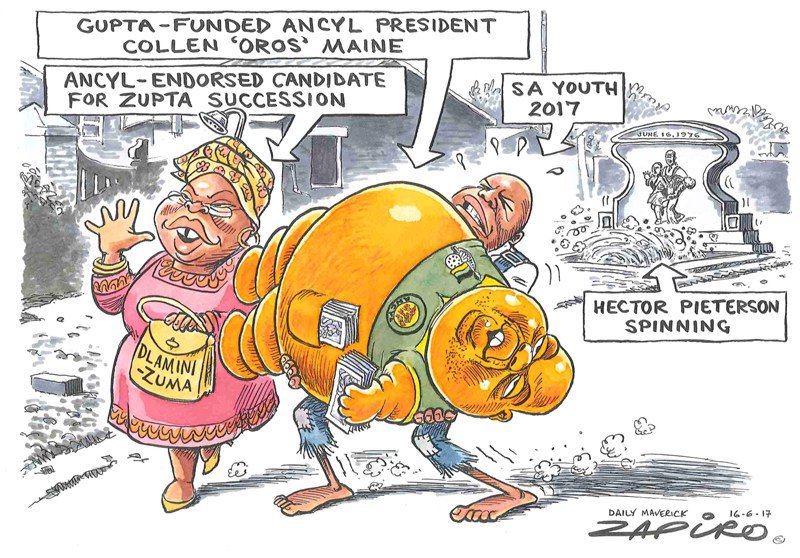 What R5.5m gets you in propaganda: The ‘suggested’ Bell Pottinger content

• Economic control has remained in the hands of a minority of privileged and powerful individuals and families.

• In South Africa, a platinum miner would have to work for 93 years to earn the annual bonus of an average CEO (Oxfam global inequality report – October 2014)It is clear that this system needs to be ended once and for all and for inequality to be properly addressed. Talent and hard work need to be recognised and rewarded and profits shared. The privilege of the few needs to be replaced with opportunity for all.
We need to END ECONOMIC APARTHEID.”

Also fascinating in the leaks is how Victoria Geoghegan upped the ante against the Economic Freedom Fighters, by editing the work of Nazeem Howa – a former editor.

In the end, says amaBhungane, the statement (with Geoghegan’s additions in red) that was sent out on behalf of MKVA read: