Inflation and the stock market

Last week, the US released its latest inflation data which, over the past three months, have been increasing significantly. Inflation has been a major issue for the US economy and for the financial regulatory authorities, as it is difficult to approach while US employment remains low. This year, after the financial stimulus introduced by new US President Joe Biden’s administration, economists predicted high levels of inflation due to the pumping of cash into the US economy. The US Federal Reserve (Fed) also commented on this, advising that high inflation is likely, but may not be here in the longer term (i.e., inflation will be transitory) and thus there is no current need for altering monetary policy while unemployment remains high. However, now that inflation has reached over 5%, mainly due to the rise in energy prices, traders have been evaluating what the market reaction is likely to be.

It is not only the US dollar, which is likely to be affected, but also stocks. Last week, we saw quite a large rise in US stock markets after the announcement of a 5% inflation rate. Following the inflation data release, the S&P 500 rose 0.65% within two hours, while the Dow Jones advanced by 0.72% and the tech-heavy Nasdaq gained 1.53%. Overall, the biggest winner for the day was the Nasdaq followed by the Dow Jones.

When we see high levels of inflation, a common side effect is the devaluation of a currency or lowered purchasing power within the economy. This means that shares can become harder to purchase, especially by individuals within the country. Subsequently, this can increase demand amongst foreign buyers as foreign currency may be able to benefit from a more competitive exchange rate. In addition to this, usually when a market sees hyperinflation, the central banks look at different possible methods of controlling the rise in prices. One method is by increasing the federal funds rate (or the repo rate in South Africa [SA]), which means that the Fed is effectively attempting to shrink the supply of money available for making purchases. At the same time, this also makes other investments, such as savings accounts and fixed deposits, more attractive due to the increase in their investment yield.

Furthermore, an increase in interest rates can alter investors’ spending and investing habits due to the higher cost of living it entails. Individual investors are impacted through increases to their credit card, overdrafts, and mortgage interest rates, especially if these loans carry a variable interest rate and have not been fixed for the longer term. When the interest rate for credit cards and mortgages increases, the amount of money that consumers can spend decreases. As a result of this, certain groups may avoid investing, or generally spending extra capital. This will not only affect the direct demand of the stock market, but also the sales figures and company revenues.

It is important to note that correlations should be considered when analysing the market, whether the currency exchange market or the stock market. It should also be highlighted that those correlations are not always as strong and can have different effects depending on the overall market. For example, in SA (and other countries across the globe), stock markets are witnessing very high unemployment, lockdowns, and economic restrictions – aspects of the market we have not previously witnessed. For this reason, it is also important to evaluate overall stock market conditions and sentiment. This can be done through analysing not only individual stocks, but indices such as the S&P 500, the NASDAQ, Dow Jones, FTSE JSE All Share Index, etc.

However, if the market believes that the central bank has set the fed funds rate too high, the opposite happens, and long-term interest rates decrease relative to short-term interest rates – the yield curve flattens. The timing of a bond’s cash flows is important. This includes the bond’s term to maturity. If market participants believe that there is higher inflation on the horizon, interest rates and bond yields will rise (and prices will decrease) to compensate for the loss of the purchasing power of future cash flows. Bonds with the longest cash flows will see their yields rise and their prices fall the most.

The current US inflation environment

The Fed concluded its June two-day meeting on 16 June and the FOMC maintained the benchmark rate at c. zero as was broadly expected. Similarly, the Fed’s 2021 inflation forecasts crept a little higher (in line with expectations), albeit not meaningfully so. However, most market participants were caught off guard by the Fed signalling that there could be two rate hikes in 2023. The main surprises for us were that the Fed seemed to have pulled the expectation of its first rate hike forward from early 2024 to 3Q23 in its dot plot estimates of future rates. At the post-meeting press conference, Fed Chair Jerome Powell indicated that initial discussions around when the Fed should talk about tapering bond purchases have now started. Here it is worth noting that when making interest rate decisions, PCE (personal consumption expenditure) is the Fed’s preferred inflation measure.

We find it telling that the Fed’s inflation forecasts have not risen meaningfully. Instead, the Fed continues to hold the view that the US inflation we are currently seeing is being driven by supply bottlenecks and the global unlock post the COVID-19-induced lockdowns. This means that the current bout of inflation is transitory, and the sooner-than-expected rate hikes are, in this context, good news as it implies that the US economy is in a better shape than at the Fed’s previous policy meeting on 28 April. The economy will also be able to come off the life support of bond purchases and low rates sooner than previously expected. This prognosis should be good news for the US economy, which now has a better outlook. Unfortunately, however, financial markets are mourning the fact that the current stimulus measures will be reduced sooner than previously expected. Furthermore, it is worth focusing on the tightness of underlying commodity fundamentals that largely led to the current situation. The very commodity-intensive “greenification of the world” theme is not going away because the Fed dot plot changed. Numerous governments are looking to infrastructure spend to grow out of this mess and again, are not going to reign in these plans post last week’s news 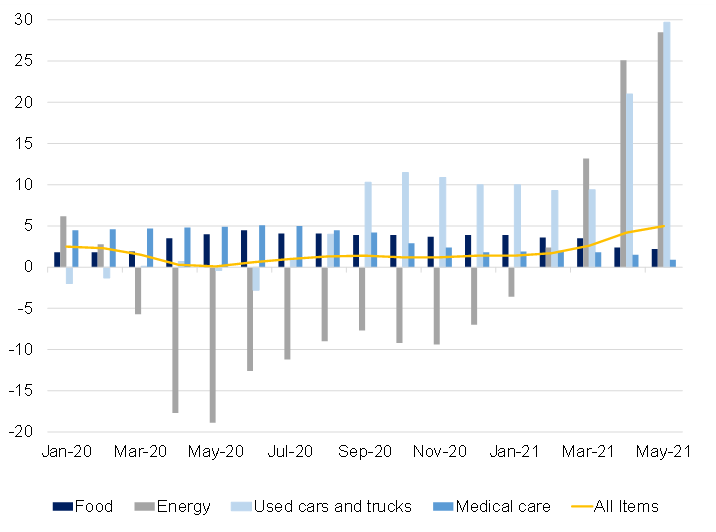 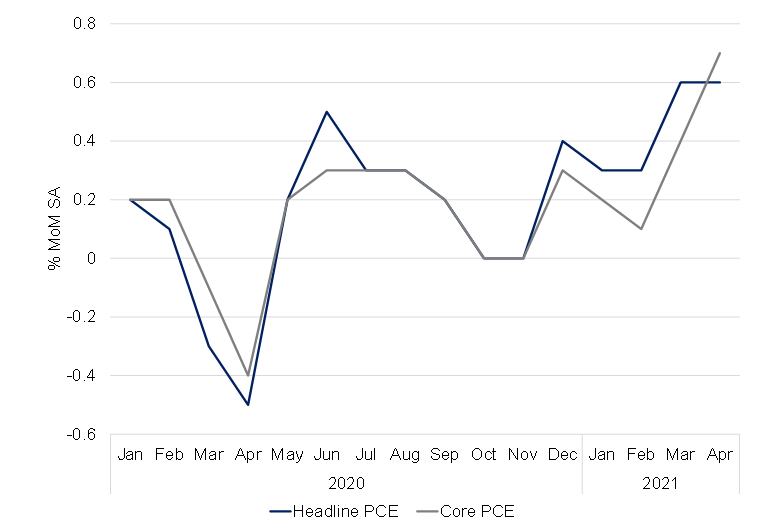 Currently, at 4.4% YoY for April, SA’s May inflation rate is expected to print at around 5.2%, when the data are released on 23 June. This jump will mainly be due to very strong, adverse base effects, from the slump in inflation a year earlier (in May 2020 – shortly after the implementation of SA’s national lockdown). The rebound in fuel prices, in particular, will have contributed to such a spike in May, with the petrol price dipping to R12.22/litre in May 2020 and recovering to R17.23/litre by May 2021.

A lesser driver of May’s expected inflation spike will be the methodological disturbances in 2Q20 when some spending items were allowed to be sold and/or could not be surveyed by Stats SA’s fieldworkers. However, inflation jumping sharply will likely prove transitory as well – although it will take inflation to above the 4.5% mid-point of the SARB’s inflation target range for the first time since February 2020 (when inflation stood at 4.6%). Still, we foresee an inflation average of around 4.2% YoY for 2021 – comfortably around the middle of the SARB’s target range. 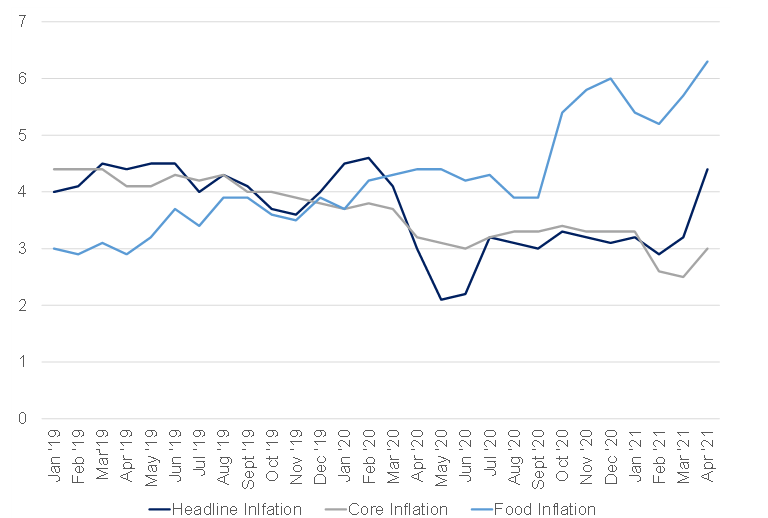 Interest rates, bond yields (prices), and inflation expectations correlate with one another. Movements in short-term interest rates, as dictated by a country’s central bank, will affect different bonds with divergent terms to maturity in varying ways, depending on the market’s expectations of future levels of inflation. As it stands, rising inflation and ultimately the need to deal with this via rate hikes remains the economic base case post the unprecedented amounts of fiscal and monetary stimulus that has been pushed into the market (not only in the US, but across the globe).

Looking ahead, the Fed will be very mindful of the “taper tantrum” experience when tailoring its message in future, and the market moves seen recently will reinforce this tendency. We believe that the most likely timing of tapering being announced will still be December 2021 and for the first rate hike to happen in 4Q23. However, much will also depend on the evolution of the pandemic and on how strong growth and inflation are in the interim.